Published on Friday, August 7 2009 | Written by Kane
There is a robotics boot camp and scrimmage on at Rangitoto College on the 8th to 9th of August starting at 9am until 4pm.
Come and have some fun!!!

Free Range Robotics on TV ONE

Published on Monday, May 18 2009 | Written by Michael Lawton

This monday Free Range Robotics were on TV ONE live! 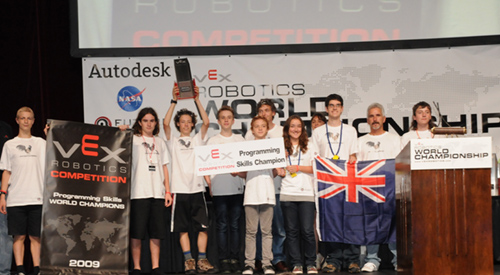 
They won the World Championship title for Programming Skills where they had to design and programme a robot to navigate over a field and score goals in a one minute period without any human intervention.

Published on Saturday, May 2 2009 | Written by Rhiannon Waller
Hi everyone,
We had a gripping final day of competition, then straight to the event dinner function. We arrived back at our hotel at 11:30pm and had to pack up the robots, and all the tools etc, and our own stuff, grab a couple of hours sleep and up again at 4am to start travels home. So I haven't had a moment to send an update.

The final day started early, as usual: In the team pit, sorting jobs for the day, getting the robot loaded up with programmes, and especial attention to scouting for potential alliance partners. We won our games and stayed at the top of our tournament division for the qualifying rounds. This meant we had literally 10 minutes to come together and discuss who out of the other 139 teams we should invite to join us in the finals matches. That was really tough - because we had had only 3 scouts to go out and watch games.

Published on Thursday, April 30 2009 | Written by Rhiannon Waller
Hi Everyone!

Today was a very exciting day! Each team has only 6 qualifying matches to get a chance to be in the quarter finals.
We won all five of our matches today, and we have one more tomorrow. Even more exciting is that Free Range Robotics the Home school team, are coming first on the placing board! This is out of a draw of 140 teams. The other 140 teams that are here in Dallas are playing off each other in a parallel tournament to ours, and the champion team of each division gets to play in the Grand Final. It looks like we have a good chance at the title!
Match one score was, 36 to 30, we had NO alliance partner, as they did not show up at all! So we played against 2 opposing robots on our own. And won!
Match two, 46 to 19, we also had no alliance partner again (their robot was disqualified for being over size just as we set up on the field) but we managed to win convincingly.
Match three 37 to 24.
Match four, 40 to 36.
Match five, 44 to 21
We have our last qualifying match tomorrow which will be followed by the finals in the afternoon.