Today was our first day in Tournament.  We had a bright and early start up at 6am and down to the lobby by 7:30 to catch the bus in to the convention centre. The Sheraton is about 20 minutes walk away from the convention centre, so we appreciated the ride in, as we had our heavy cases of tools and the robots and laptops and so on to carry.

The first part of the day was spent setting up the pit (or booth) with tools and robots organised, and all checked over, banners and flags up, and sorting through the paperwork. We had forms to sign,and check lists to go over, match times and alliance groupings to sort out for scouting.  When you enter the convention centre you walk in on a long rich red carpet pathway which leads to the tournament fields and the team pits. All the teams are organised according to their numbers.  It's really fantastic when you reach the 2900's and see a long row of pits bearing the New Zealand flags.  There are 12 teams here this year.  Last year we were just four pits together.  The New Zealand presence has been much anticipated and the word whispering around the centre is that we are to be feared... one girl said to me "when you go up and down the pit area everyone is terrified of the New Zealanders"  I replied "for good reason".  May as well maximise the psychological advantage!

World Champs: NZ to US

We have arrived safely in Dallas, but are pretty jetlagged. Everyone is feeling foggy.

The flight to LA was great - we were well looked after and the robots were treated carefully.  It was a really full flight, travellers starting to move again since the volcano cloud is moving.

We had a 6 hour stop in LA, so checked in our luggage to the Dallas flights nice and early.  The Southwest airline staff were not happy with the heavy tools and equipment and made us open up our cases.  Picture us sitting in the middle of the line, floor strewn all over, covered in saws, hammers, spanners, electronics parts, batteries, robots pulled out of packaging.....the other people in line were quite loudly commenting "what on earth are they planning to do???" 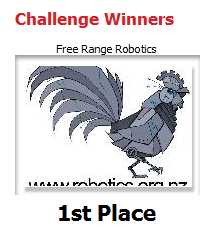 It is great to see that all our hard work on the website has finally paid off.
This means 2921c is automatically qualified for the 2010 VRC World Championship.
Also included with our prize are is a VEX Robotics Classroom Lab Kit worth US $699

Hi everybody, Shine TV have put together a program about us and are playing the team video (with different music as they can’t play the original due to copyright issues) on Shine TV tomorrow night, and again on Saturday and Sunday.

This will first air the day that Shine TV go live on Freeview.

The programme can also be watched online here.

Homeschool team Free Range Robotics have won the New Zealand National VEX Robotics Championship for the second year in a row. They also scooped more than their fair share of other awards, winning the New Zealand Championship awards for Web Design (www.robotics.org.nz), the Think Award for Autonomous Programming, the Promote award for the best team video, the VEX Essay Award and the runner up for Programming Skills Award.

The VEX Robotics Competition is run throughout the world with over 2400 teams in more than 13 countries. The program was designed to encourage students to enter the fields of science, technology, engineering and mathematics. Dr Johan Potgieter, senior lecturer at Massey University School of Advanced Engineering and Technology, who instigated the VEX competition in New Zealand, said  “We have students now coming into engineering who have never thought of doing it… it’s really opened up a lot of opportunities for these kids.”

Each team has to design, build and program a robot to play a specific game. This year’s game is Clean Sweep, and the object of the game is for alliances of two teams (three for the finals) to obtain a higher score than their opponent’s alliance by moving as many balls as possible into the opposing team’s side of the field.